You are here: Home / Archives for ICFFMAJ

On 4/27/15 our brother, Mumia Abu Jamal was ordered back to the infirmary at SCI Mahanoy in Pennsylvania. Ever since yesterday Mumia has been held incommunicado at the hands of prison officials. At this point we do not know what is happening with Mumia. Yesterday his lawyer, Bret Grote was not allowed in to see him– his own lawyer! Mumia’s attorney, Bret Grote and a member of the Pennsylvania Prison Society, Johanna Fernandez, both people who are supposed to have authorized access inside the prison at any time according to the DOC rules were denied.

Prison officials want to keep Mumia isolated from outside visitors and to keep pictures of the medical neglect being inflicted upon Mumia by prison officials from being seen by the public. These sadists do not wanna be exposed for their role in premeditated murder. What the police failed to do on 12/9/81 and what this government failed to do in 8/1995 and 10/1999 prison officials are trying to do now and that’s murder Mumia.

They are keeping him isolated from the world and slowly killing him. We cannot allow this to happen and it’s up to us to stop the state from committing murder just like we did in 95 and 99!

Keep the pressure on! We must speak out for our freedom fighter brother Mumia, just as he has always spoke out for us. We can’t afford to relax with this situation for one minute. Make no mistake: they will murder Mumia if they think they can get away with it.

From Prison Radio:
Quick Sheet to calling Prison & State Officials
Often when we call in, prison and state officials have taken their lines off the hook. Know that every single call matters, even when they don’t pick up. Here are three numbers that usually work; please focus on calling:

If you get voicemail, leave a message.

If answered, say as much as you can before they end the call. Please call that same number and do it again. Our experience is that after calling the same number multiple times, whomever answers the phone will eventually talk to you, if only to try to persuade you to stop calling. This is your opportunity to fully state your concern and demands for freedom and lifesaving medical care.

This government is actively killing Mumia right now at SCI Mahanoy. When Mumia was transferred to general population in December of 2012, Maureen Faulkner and the Fraternal Order of Police made it clear that they intended for him to die there. Maureen Faulkner stated that now the time “doesn’t seem so far off” before Mumia “stands before his ultimate judge.” She hinted that she hoped he’d be killed by another inmate. They are currently carrying out that exact plan with prison doctors! Mumia was held in isolation for thirty years. When they saw that he had emerged from that strong, healthy, and determined, they decided to come at him another way. Despite being shot and beaten on December 9th, 1981, Mumia survived. They failed at executing him despite two execution dates, and after thirty years of isolation they couldn’t break his spirit. Mumia’s medical condition goes far beyond medical neglect or incompetence– this is deliberate murder.

Mumia’s wife, Wadiya Jamal, visited him twice this week and witnessed that his condition is way worse than the previous week. Mumia came into the visiting room walking baby steps, in severe pain, and talking slowly and quietly. His face was sunken in, his skin is blackened like a burn victim with open wounds, and his arms, torso, legs and testicles are severely swollen with skin that is tightened and hard from swelling. Sitting down and standing up are both painful.

Prison doctors say they don’t know exactly what’s wrong with Mumia and yet they won’t allow outside doctors in to see him. It isn’t that they don’t know, it’s that they know exactly what’s happening and it is exactly what they intend to happen! One of the drugs Mumia is being given, Cyclosporine, is known to lower the immune system and to cause many of the symptoms Mumia is being tortured by: chills, aches, problems with speech or walking, muscle weakness, tremors or muscle spasms. Mumia is suffering horribly and he is stuck choosing between having no medical care or being treated by the people employed by an institution which is set on his murder. The only solution is for Mumia to be home with his family!

It’s no accident that this attack on Mumia comes as people are rising up across the country to protest the police murders of Eric Garner, Mike Brown, Freddie Gray and many more. Mumia’s voice has been key in educating the world about these killings and in uniting people in struggle. As masses of people are rising up in rebellion they need Mumia silenced more now than ever. We must unite like never before to fight against this police terrorism and bring Mumia home! Mumia has given his life for this movement, he has sacrificed everything for true justice, now is the time to pay it back!

Demand that Mumia Abu-Jamal see an outside doctor ASAP.

DEMAND THAT THE DEPARTMENT OF CORRECTIONS AND THE STATE OF PENNSYLVANIA RELEASE MUMIA FROM PRISON SO THAT HIS FAMILY AND FRIENDS CAN PROVIDE HIM WITH THE MEDICAL CARE HE NEEDS!

Click below to contribute in getting Mumia the immediate medical care he needs
https://www.indiegogo.com/projects/mumia-abu-jamal-needs-medical-care-now

It is PayPal secure & quick-- Thank you and Onamove! 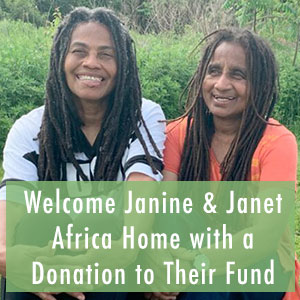 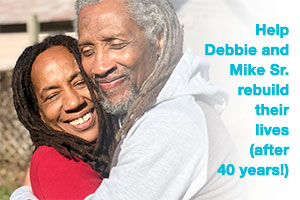 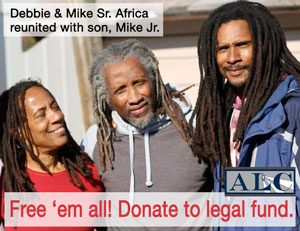 And, we always remember the two MOVE members who died suspiciously in prison:

42 years after the Aug. 8, 1978 confrontation in Philadelphia, FINALLY all of the “MOVE 9” prisoners are out of prison!

The MOVE family was bombed in an attempt to stop their work to free all Life.  They remain steadfast. Long Live John Africa!

All living beings, things that move, are equally important, whether they are human beings, dogs, birds, fish, trees, ants, weeds, rivers, wind or rain. To stay healthy and strong, life must have clean air, clear water and pure food. If deprived of these things, life will cycle to the next level, or as the system says, ‘die’. - John Africa